The Book of the Keys of the Work. 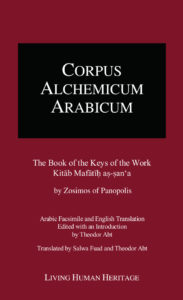 Arabic Facsimile and English Translation. Edited with an Introduction by Theodor Abt.
Translated by Salwa Fuat and Theodor Abt.

346 pages with 16 illustrations, black-white and in colour (introduction) and with about 100 coloured images of the manuscript. With bibliography and index.
Living Human Heritage Publications
ISBN 978-3-9523880-6-8

From the Introduction of the editor:

The manuscript of Zosimos’s Kitab Mafatih as-san’a (The Book of the Keys of the Work), here presented as a facsimile together with a parallel English translation, makes this document accessible in a Western language for the first time. Although the scientific community has known of this book for almost a century, it has up to now remained difficult to obtain for study purposes. Yet this text is crucial for the history of alchemy and especially for a better understanding of the origins and the significance of symbolic alchemy, as will be demonstrated in the following. […]
At the beginning of the Kitab Mafatih as-san’a we read: «Zosimos, when he wrote about these treatises to Theosebeia, named them The Keys of the Work, and the completer (hatim) of what had been extracted as essence from its sciences. They (the ten keys) are for Theosebeia; it is the last thing that he wrote for her. And when she came across it, she understood the work.» On the basis of arguments collected in the introduction to this book, one can conclusively say that it is a translation from a Greek original, and it can be considered as Zosimoses summa, the very essence of his teachings. 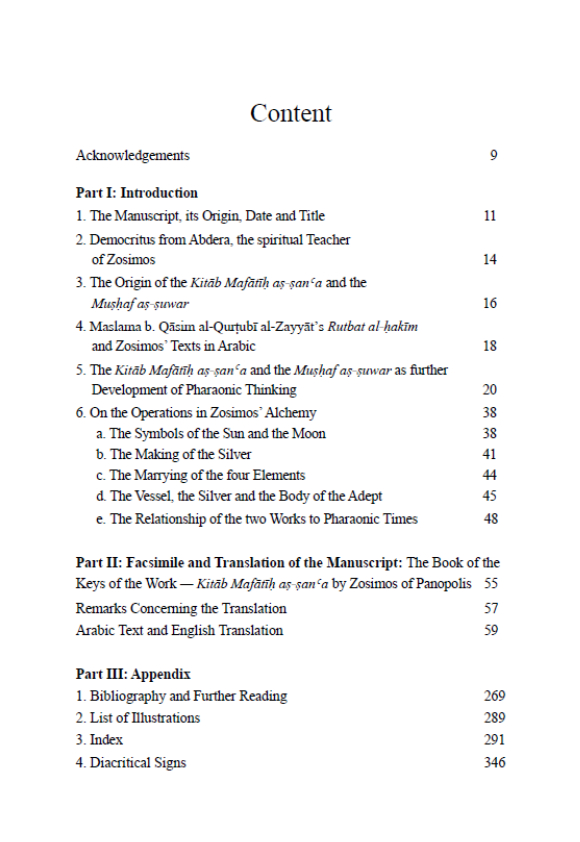