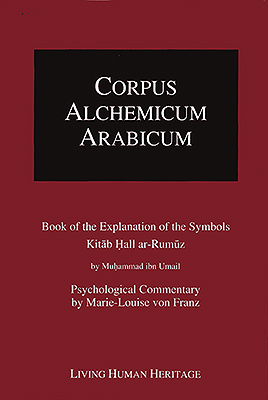 Book of the Explanation of the Symbols
Kitab Hall ar-Rumuz

Edited by Theodor Abt

This is the last manuscript of Dr. Marie-Louise von Franz, dictated during the final years of her life. It not only contains a brilliant historical survey of alchemy since Egyptian times, but above all, a profound comment on a newly translated Arabic alchemical text from the 10th Century which is a ‘Summa’ of her entire life’s experience and work.

The book contains the early translation that was available to Dr. von Franz as well as the translation as published in CALA I, which, step-by-step gets commented on by her, sectionwise.

The history of this publication reads like a fiction story. When I lectured on alchemy in the late 1960s at the Jung Institute in Zurich, I expressed my anger that I could not get an answer from the Hyderabad Library (India) where Stapleton indicates that they have many manuscripts of Ibn Umail. Even C. G. Jung could not get an answer. A student, Dr Abt, picked up the thread and offered to go to Hyderabad.
With the help of various personalities and thanks to remarkable synchronicities he could get hold of a crop of photocopies of these manuscripts. Then came the difficult task of translation because the translator had not only to know tenth century Arabic, but also to be familiar with alchemical thinking.
Finally, Dr Abt succeeded in finding in Cairo, in the person of Mrs Salwa Fuad, an adequate translator of the language, and having himself learned Arabic, Dr Abt provided the alchemical choice of word. This enterprise grew and Dr Abt is now in the possession of a valuable collection of Arabic alchemical manuscripts, which we intend to publish. A look at their content shows that they constitute the missing link within the mystical branch of alchemy, between the Gnostic-Hermetic Greek alchemy and that of the mystical Latin alchemy in Europe. Up till today the text De Chemia of Senior—as Muhammad ibn Umail was called in the Latin translation—was practically the only relevant writing concerning this period of time. The invaluable finding of Gnostic manuscripts in Nag Hammadi has opened up new vistas onto the tradition of Gnosticism and Hermetism and now a new world also opens up onto the whole of mystical alchemy in this period. A rational scorn against this part of alchemy, which was useless for the history of chemistry, had blocked the view till today. It is C. G. Jung’s unique merit to have shown the invaluable treasures of insight which lay hidden in this material. Hitherto, only some esoteric societies knew something about it, but their viewpoint was lacking a connection with the empirical reality of the psyche and was, and still is, in danger of drowning in historical associations.
The text of the Hall ar-Rumuz with my commentary is only an hors d’oeuvre for the meal to come. We decided to call the whole text-collection Corpus Alchemicum Arabicum (CALA).
I want to express my deepest gratitude to Professor Theodor Abt for his bold enterprise and incessant devotion to the task. My thanks also go to Mrs Salwa Fuad for deciphering the nearly unintelligible text. My greatest gratitude goes to Dr Barbara Davies who has been my right hand and who has helped me to realize this work and never forsook me during all my fits of despair. I also want to thank Dr Alfred Ribi and Dr René Malamud for valuable bibliographical suggestions.