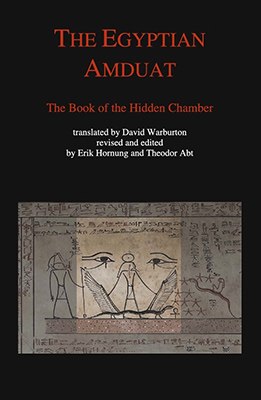 200 color images of the Amduat found in the tomb of Thutmosis III in the Valley of the Kings in Luxor/Thebes.

Amduat «What is in the Netherworld» was used in Ancient Egypt as a generic name for descriptions of the netherworld, but in modern Egyptology is reserved for the oldest of these compositions which has the original title of «Treatise of the Hidden Chamber».

We know it since the time of queen Hatshepsut, ca. 1470 B. C, and during the 18th dynasty it forms the exclusive decoration on the walls of the royal burial chamber. In Ramesside time (19th and 20th dynasty), it still belongs to the standard decoration of royal tombs, besides other Books of the Netherworld. The only non-royal person in the New Kingdom who has used an Amduat for his tomb is the vizier (highest official) Useramun who was in office under Hatshepsut and Tuthmosis III.

After the end of the New Kingdom (1070 B. C), the Amduat was copied on papyri and on coffins and became now available for priests and their relatives. It was still prominent in tombs of the Late Period and on royal or non-royal sarcophagi until the Ptolemaic Period. Quotations from it are still found in the Roman Period.

Whereas the Book of the Dead is composed of individual spells with no fixed sequence, the Books of the Netherworld follow a strict pattern. The earlier compositions (Amduat and Book of Gates) are divided into twelve sections which correspond to the twelve hours of the night, text and pictures always forming a unity. Thus for the first time in history, the world beyond death is described here in word and image.

In addition to the long, illustrated version of the Amduat, a short version, without illustrations, is found in the tombs and on papyri. It is a sort of abstract or summary, listing important names and adding further remarks on the usefulness of the book. Only Tuthmosis III, in the upper pillared hall of his tomb, adds 741 deities from the Amduat to this catalogue, enemies excluded. Stars are added to express the desired ascent of the Ba-soul to heaven.

During the 18th dynasty, all texts are written in cursive hieroglyphs which were used for religious texts on papyri. For quick orientation, introductions and instructions are written in red, the rest black. Starting with Tutankhamun, the writing changes to normal hieroglyphs which are usually coloured. In our text, we transcribe the cursive forms into normal hieroglyphs and follow, wherever possible, the version of Amenhotep II, but in some places it had to be corrected or completed; the red parts (rubra) are mostly identical in the tombs of Tuthmosis III and Amenhotep II, but Tuthmosis, trying to follow the orientation of the hours according to the text, had to rearrange some of the registers (each hour but the first is divided into three horizontal sections, the registers). Normally, in the center of each hour the sun bark is placed, showing the sun god in his ram-headed, nocturnal form (the ram is one of the signs for the Ba-soul) passing through the Netherworld. A complete edition of all versions of the New Kingdom has been given in «Texte zum Amduat» by Erik Hornung (see bibliography). The numbers in brackets refer to this edition, and the continuous numbering of the deities (without brackets) is now generally used, going back to the German edition (with translation and commentary) of 1963.

A subsequent volume with the same layout will bring a detailed psychological commentary by Theodor Abt. The commentary is based on lectures given at the Research and Training Centre for Depth Psychology in 1998 and 2000.

Basle and Istanbul, May 2006 Erik Hornung and Theodor Abt 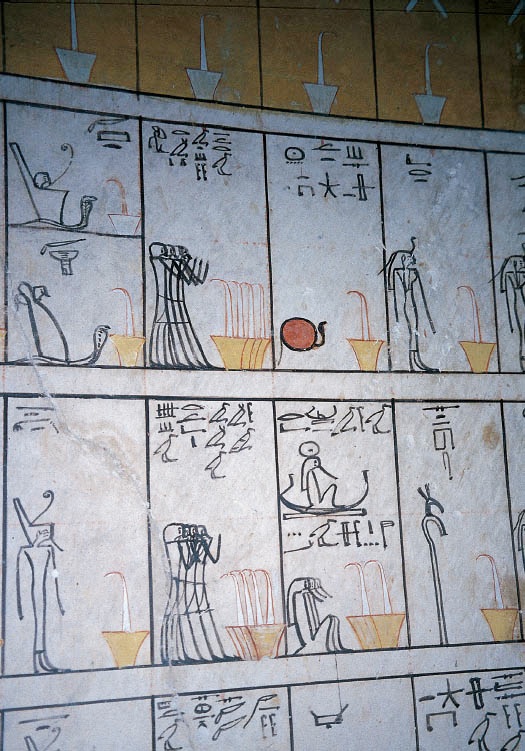