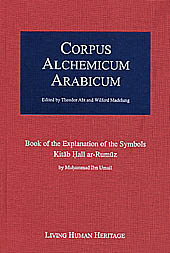 Edited by Theodor Abt, Wilferd Madelung and Thomas Hofmeier.
Translated by Salwa Fuad and Theodor Abt.

The Corpus Arabicum Alchemicum (CALA) will be editing and publishing a collection of key manuscripts on symbolic Arabic alchemy. The Arabic text is always accompanied by a parallel English translation. In order to improve the understanding of the spiritual side of alchemy, each edited volume is followed by one or more commentaries.

Volume I of CALA presents the first edition of Hall ar-Rumuz (Explanation of the Symbols). It was written by Muhammad Ibn Umail (10th century), one of the most important representatives of the symbolic branch of alchemy. In later Latin alchemy he is known under the name, Senior.

Ibn Umail’s description of the alchemical work is a symbolic rendering of his experience of an inner-psychic process of transformation that he considered as being the highest goal in human life. Due to his extremely introverted lifestyle and his devoted focus toward the inner world, Ibn Umail was able to observe and describe this mysterious process with the “substantial symbols”, emerging out of the depth of his psyche.

Ibn Umail’s symbolic attitude facilitates a kind of inter-confessionalism: he states in Hall ar-Rumuz that “the result of the alchemical work can be produced by a person from any religion”. The psychic transformation achieved by the work leads to the stone, a symbol for the solidified divine kernel of an individual. This center also has a collective dimension. Thus Ibn Umail also names the stone “mosque” or “temple”.

His work connects and bridges the Ancient Egyptian quest for immortality directly with later Latin alchemy and the modern depth psychology of C.G. Jung with its aim of creating spiritual gold: consciousness. Ibn Umail’s work thus constitutes an important cultural link in the history of the spiritual aspect of alchemy.

From the Contents:
Foreword

2. Muhammad Ibn Umail and his significance for our time

Overview of the manuscripts of the Hall ar-Rumuz

Book of the Explanation of the Symbols by Muhammad Ibn Umail

Text in Arabic and English